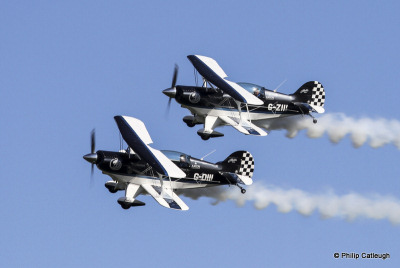 These agile aeroplanes are incredibly responsive and allows the team to display in close proximity when performing formation aerobatics. 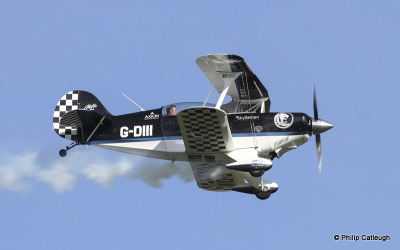 Photo by Phil Catleugh
History
The Wildcat Aerobatics Team was formed in 2010 by Al Coutts and Willie Cruickshank.

They have developed an exciting act using their two Pitts Special S2B biplanes to perform a graceful mix of balletic, close-formation aerobatics and high-speed opposition passes where their closing speed is in excess of 400mph.

The team regularly displays in the UK, the Channel Islands and northern Europe to hundreds of thousands of spectators every year, both at large-scale public events and smaller private celebrations.

The pilots are Al Coutts, Willie Cruickshank and Ed Ludlow. The display is publicised by Kate Royall who also commentates on Wildcat displays across the country.