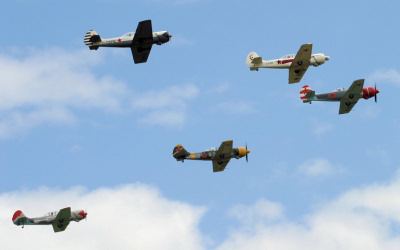 They are Europe's largest and most spectacular formation aerobatic display team. With a unique brand of tightly-choreographed aerobatics, thunderous radial sounds and magnificent smoke effects, the Aerostars have been thrilling crowds for over seventeen years.

In 1998, the team ambitiously added two new pilots and a pair of the lighter, more potent YAK-50 single seaters to the show, to increase the energy of the routine.

From 2000, the team upgraded to the more spritely YAK-50. In 2001 the Aerostars underwent a change of team line-up and decided to focus on the logistically more manageable six aircraft size. This became the blueprint for the display which is presented today.

The Aerostars operate six identical YAK-50 aircrafts, featuring a 360hp supercharged Vedeneyev M14P 9 cylinder radial. This is the same aircraft that powers the majority of Russian radial aerobatic aircraft. The YAK-50 is stressed to +7/-5G and has a top cruising speed of 155 knots.

The YAK-50 was designed by the Soviet Yakolev design bureau in the early 1970s to provide the USSR aerobatic team with an aircraft to dominate international competitions. Cost was no object for the project.