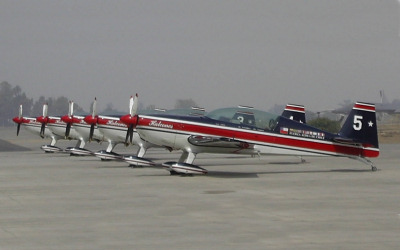 One of the Halcones signature moves is recreating the Chilean flag in the air using smoke.

History
The Escuadrilla de Alta Acrobacia Halcones was formed in 1981 which was a dedicated unit established to make presentations of aerobatics of the highest level of skill. The first team of pilots flew the Pitts S2B and S2S and received instruction in the United States.

During the first 10 years of displays the Halcones performed at 400 exhibitions in Chile. In 1985 they displayed their Pitts aircraft in Equador. In 1987 they travelled to Europe and displayed at The International Air Tattoo in the UK and returned to this venue in 1989 where they received a trophy for the Best Air Display. Also in 1989 the Halcones displayed in Belgium and crossed the English Channel (Dover to Calais) to celebrate the 80th anniversary of the crossing by French aviator Louis Bleriot.

In 1990 the Halcones replaced it Pitts aircraft with six Extra 300 aircraft and continued its displays in Chile and around the world. Displays were perfomed in the USA, England (RIAT 1993 won the Sir Douglas Bader trophy, and RIAT 2002), France, Israel, Belgium, Ecuador, Peru and Chile. From 2003 the Halcones operated the Extra 300L aircraft.