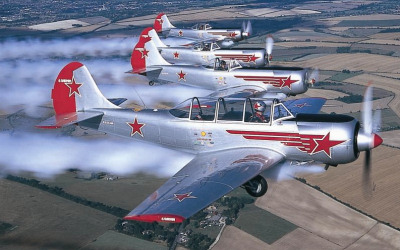 The Yakovlevs display programme has been developed for all the family, demonstrating precision flying at its best as well as the unique capabilities of the high performance Yakovlev aerobatics aircraft. It involves close formation manoeuvres and graceful aerobatics.

The team flies Russian aircraft made by the Yakovlevs design bureau. These reliable and robust aircraft were designed for training and world class aerobatic competitions.

History
The team was formed in December 1999 and flew a successful first airshow season in 2000. For the 2001 season the teams aircraft are marked in their distinctive colour scheme.

New for 2001 was the unique Super Yak-50 - one of the fastest climbing piston single engined aircraft in the world - as well as the Yak-52, and both aircraft are world exclusives for the Yakovlevs.

Leading the Yakovlevs is the world's most powerful Yak 52, known as the Super 52. This unique two seater aeroplane was specifically developed for the team. Following in close formation are three single seat Yak 50s. These world championship aerobatic aircraft were much loved for their sparkling performance, manoeuvrability and grace.