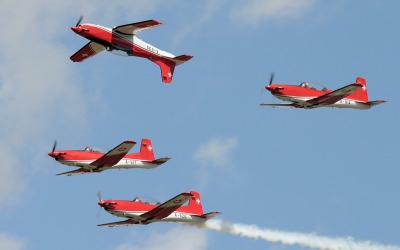 As well as the Patrouille de Suisse, the Swiss also display the PC-7 Team at international events. The PC-7 Team consists of nine Pilatus PC-7 Turbotrainer aircraft. As ambassador of the Swiss Air Force, the PC-7 Team shows dynamic, elegant and precise formation flying at its best.

Flying aerobatics in close formation with propeller-driven aircraft demands the highest level of skill by the team's military pilots.

History
The PC-7 Team was established in 1987 when the Swiss Air Force raised a nine-ship PC-7 formation. During the air force championships in Dubendorf the freshly founded PC-7 Team was to present an aerobatics programme for the first time. After a brief training period, the programme was well received by the public. Nevertheless, the Team was not activated in 1988.

It was not until the following year in 1989 during the 75-year anniversary of the Swiss Air Force, that nine new pilots were designated who were able to begin training under Major Res Dubs, former Patrouille Suisse leader, for performing as the PC-7 Team. Since 1989, the PC-7 Team has been flying at various events, mainly in Switzerland. Since 1992, the PC-7 Team occasionally performed abroad. (Italy, France, Ireland, Germany, Israel, Hungary, Czech Republic, UK).

The PC-7 Team's homebase is Dubendorf Air Base, but they often operate from Militarflugplatz Emmen or Locarno Airport. All Pilots of the PC-7 Team are full-time military pilots and usually fly the F/A-18. In 2014 the nine aircraft were fitted with smoke generators, it was publicly used for the first time on 1 August 2014 at Buochs Airport at the roll-out of the Pilatus PC-24.