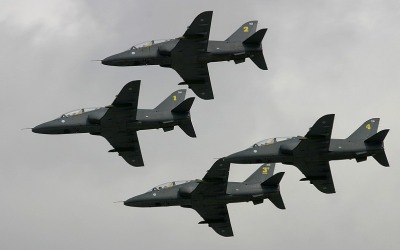 UK Airshows:
The Midnight Hawks took part in the flying display at the Royal International Air Tattoo (RIAT) at RAF Fairford in 2004 & 2017.

The Midnight Hawks are the Finnish Air Force display team who fly four standard camouflaged BAe Hawk Mk 51 fighter trainers. There are no special markings on the aircraft, because they are always borrowed from Fighter Squadron 41. For each display 40cm tall yellow numbers from 1 to 4 are added to the tail. The spare aircraft is always number 7 and pilots have the official Midnight Hawk patch on their flight suites.

Each summer the team performs in various airshows around Finland and performed at the Royal International Air Tattoo at RAF Fairford in 2004, and also 2017.

History
The Finnish Air Force Academy's display team were formed before the war when they performed with Gloster Gamecocks in formations of over 10 aircraft. The tradition of formation flying continued and it became a trademark of the Finnish Air Force Academy's annual Midnight Summer Airshow which usually took place on the third Saturday of June. Over the years this event has grown into a full airshow and because of the midnight sun in Finland the airshow starts at 7pm and goes on until midnight when the last display is flown.

The aircraft flown have been Academy's standard trainer aircraft. During 1960 to 1980's, the Saab Safir and Fouga Magister were used, and from the beginning of the 1980's Valmet Vinka and BAe Hawk Mk 51. During the 1990's the Finnish Air Force Academy's jet display team started to perform also in the other airshows than just the Academy's own Midnight Summer Airshow. 1997 saw the change. In the biggest ever airshow in Finland, Oulu International Airshow, the Finnish Air Force Academy's jet display team had become the 'Midnight Hawks'. Immediately the name spread around the country and the world - Finnish Air Force Display Team Midnight Hawks had been born. 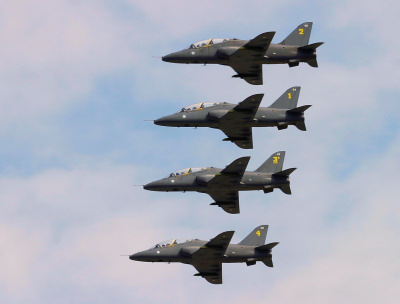