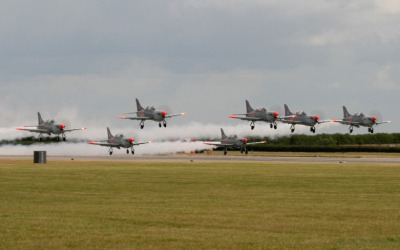 Team Orlik is an aerobatic demonstration team of the Polish Air Force which displays using nine PZL-130 Orlik aircraft which gives the team its name. The team is based at Radom-Sadkow in Poland. The team members are volunteers and they represent the 2nd Basic Flying Training Centre from Radom.

The first public display took place at the Royal International Air Tattoo at RAF Fairford in 1998. The team has flown some seasons with nine aircraft, but since 2011 the team flies seven aircraft.

History
Team Orlik was formed at Air Force Officers' College Commanding Officer order on 1st January 1998. In March 1998 pilots started flying training and they were ready to present their performance on 15th April 1998. The first public display took place at RAF Fairford during the Royal International Air Tattoo and the performance was recognized by the spectators in enthusiastic way.

During the Air Show `98 at Deblin, pilots from both the team and the 60th Regiment presented 21 aircraft formation flying in the number 80 shape tight formation. In 1999 "Orlik" team participated in air shows in Slovakia and Lithuania, where it has been awarded the best aerobatic team. Moreover the team displayed at Fairford once again. In the year 2000 team was invited to two most important events which took place at Dijon (International Aerobatic Teams Fly-in) and in Biggin Hill (The Battle of Britain 50th anniversary air show). After the display at Biggin Hill team was invited by the British authorities to perform at Plymouth. From the 2003 season the "Orlik" team was enlarged to 9 ship diamond formation.

The team success made big impression on the Polish Air Force Commander who has awarded team members with "Ikar" statue.