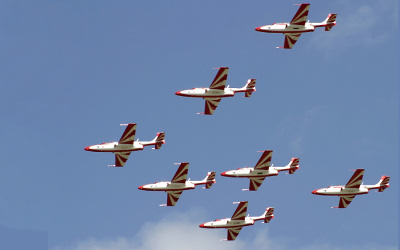 Team Iskry (White-and-Red Sparks) is an aerobatic demonstration team of the Polish Air Force which currently displays using seven TS-11 Iskra aircraft. The team is based at 1 Air Training Centre in Deblin, Poland.

The team was originally formed in 1969 at the 60 Training Wing in Radom under the name Rombik, the team flew four TS-11 Iskras. The team grew to nine pilots between 1993 and 1998 and was rebased to the 1 Air Training Centre in Deblin.

The first major display by the team was at the Polish Aviation Ceremony on 17 August 1971 in Deblin. In 1981 the team had a three year break because of martial law in Poland but was reactivated in 1984. In 1991, Team Iskry, as they became known, performed at Zoerstel in Belgium, and Taszar in Hungary. In 1995, they displayed at the Royal International Air Tattoo in the UK. In 1996, in the Czech Republic, "Iskry" was recognized as the best aerobatic team.