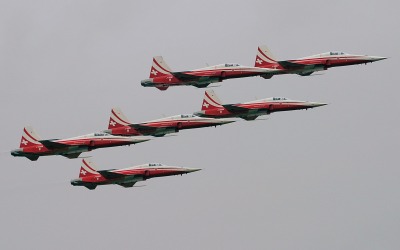 The Patrouille Suisse are scheduled to display at RIAT 2020.

The Patrouille Suisse fly six Northdrop F-5E Tiger II aircraft. The Swiss team are based at Dubendorf, Switzerland. Their F-5E aircraft are now painted in the national colours of red and white with the white cross clearly visible on the underneath of the aircraft.

The Patrouille Suisse previously flew the Hawker Hunter Mk.58 aircraft but switched to the faster and more manoeuverable Northrop F-5E Tiger II in 1994 - 1995.

History
The Patrouille Suisse were officially founded on 22nd August 1964. For 30 years (1964 to 1994) they used the Hawker Hunter Mk.58 aircraft. The Patrouille Suisse Hunters were indistinguishable from other front-line aircraft as they were part of the operational Swiss Air Force. When they were not practising or performing they carried out regular operations. The Patrouille Suisse performed for the last year with the Hawker Hunter in 1994 and then used the more manoeuvrable F-5E Tiger II from 1995. The present F-5E Tiger II aircraft are still part of the operational Swiss Air Force but they have been painted in the national colours of red and white.

Performances remained confined to Switzerland due to its strict neutrality, however this changed in 1978 when the team travelled to Salon-de-Provence by invitation of the French, with six aircraft. In 1991, the team changed the paint scheme to incorporate the Swiss flag colors (red and white) and the logo for the 700th anniversary of the Swiss Confederation and in 1996 smoke systems were fitted to increase the teams visual appeal.

The Swiss team do their training at Emmen, north east Switzerland.