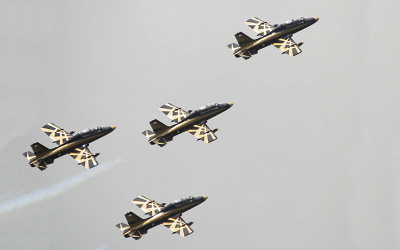 The paint scheme is mainly black and gold which represents the desert's golden sands and the black oil that lies beneath it.

The smoke generators produce red, green, white, and black smoke which represents the colours of the flag.

The first public aerobatic demonstration was on 13 November 2011 during the Dubai Air Show. Al Fursan also displayed at the Royal International Air Tattoo at RAF Fairford on 7th-8th July 2012.