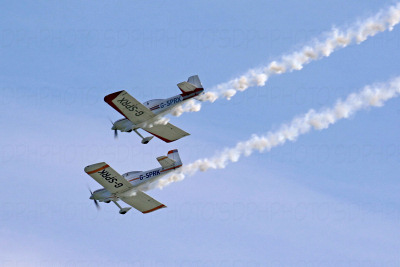 They display at many airshows in the UK and Europe and can perform both aerobatic daytime displays and twilight pyrotechnic displays using wingtip pyrotechnics and coloured LED lighting. 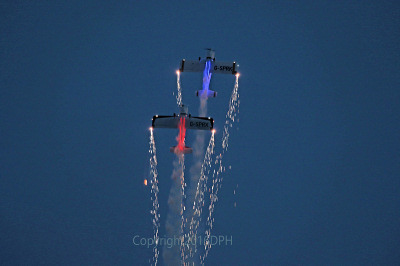 Photo by David Hackney
History
Jon Gowdy flies the lead aircraft of the Fireflies. He has displayed aircraft ranging from the DC3 to the Rapide, the De Havilland Vampire jet trainer and more recently as a member of the Twister Duo flying the delightful Silence Twister. He currently flies Boeing 767 airliners, based at Heathrow.

Andy Durston left the Navy in 2012 where he flew the Firefly, Tucano, Hawk and Harrier. He gained his commercial licences and now flies the Airbus A320 series. Along the way, Andy has owned a Pitts S1-S and a share in a Yak52, and flown numerous types including a T6 and Yak 50. Andy continues to fly gliders, teaching and examining in many areas including advanced aerobatics, instructor coaching and cloud flying training.

The Fireflies perform in two Van's RV4s. The Van's series of sport aircraft are by a long way, the most successful line of build-it-yourself kit planes on the planet.

The daytime display include elements of close formation aerobatics, opposition and synchro work, all with white smoke filling the sky. They also perform a twilight pyrotechnic display with wingtip pyrotechnics and coloured LED lighting along the aircraft fuselage to make them really stand out from the crowd.