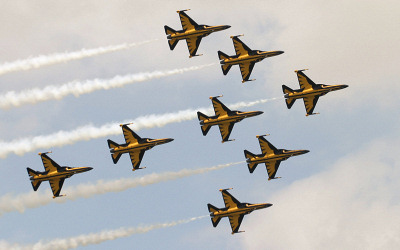 The Republic of Korea Air Force Aerobatic Team, the Black Eagles, was formed full-time in December 1994.

Since 2010 they have flown eight KAI T-50B Golden Eagle supersonic advanced trainer jets. The aircraft are painted in black, yellow and white colours.

They are part of the 8th Fighter Wing of the Republic of Korea Air Force, and based at Wonju AB, in Gangwon province.

The 'Black Eagles' visited the UK in 2012 and were awarded the Boeing Trophy for best display at the RAF Waddington International Air Show. They also displayed at the Royal International Air Tattoo at RAF Fairford in 2012 winning the King Hussein Memorial Sword, for the " 'Best Overall Flying Demonstration' and the 'As The Crow Flies Trophy'.

They will display at the Southport Airshow and the Royal International Air Tattoo in 2022.