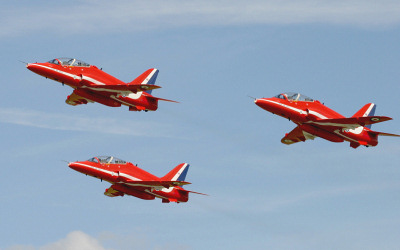 There will be just seven Red Arrows display aircraft in the 2022 season as two of their pilots have moved to other roles within the Royal Air Force.

Red Arrows Route Maps for the 2022 can also be found on the Red Arrows Schedule Page. The Red Arrows carried out their largest ever tour of North America, over nine weeks, in August & September 2019. More info here...

There is actually a 10th Red Arrow which is flown by the Team Manager who provides commentry during the display. The 10th Hawk is also used for air to air photography of the rest of the team. During international tours, the Red Arrows have been used to market the BAE Systems Hawk to overseas customers with considerable success.

History
The Red Arrows display team was formed in 1965 using the Folland Gnat. Previously the team was called the Yellow Jacks because of the colour of the Gnat. However in 1965 the Gnat was painted red and the team changed their name to the Red Arrows. The very first display by the Red Arrows was on the 6th May 1965 at RAF Little Rissington, near Cirencester where they were introduced to the media. The first public display was at Clermont Ferrand in France on 9th May 1965 and the first UK public display was at Biggin Hill on 15th May 1965. The Red Arrows were initially based at RAF Fairford, Gloucestershire, and had only seven display pilots. By 1968 the team flew with nine aircraft and the Diamond Nine formation became their trademark.

In 1979/80 the Red Arrows converted to the BAe Hawk advanced trainer aircraft which they use today. Until early 1976 the Red Arrows operated from RAF Kemble as a detachment of the Central Flying School (CFS) based at RAF Little Rissington. CFS moved to Cranwell in April 1976 and, thereafter, the Red Arrows were parented by RAF Brize Norton although they continued to fly from Kemble. They were based here up until the Spring of 1983 when they re-located to RAF Scampton in Lincolnshire. In 1995 they had to temporarily move to RAF Cranwell in Lincolnshire because RAF Scampton was closed in 1995 as part of the Defence Costs Study. The Red Arrows returned home to RAF Scampton in December of 2000. RAF Scampton will continue to be a satellite airfield administered by RAF Cranwell.

The team's first leader was Lee Jones who passed the leadership to Ray Hanna in 1966. Ray led the Red Arrows for four seasons and went on to become the best known UK warbird display pilot.

In 2010, Flight Lieutenant Kirsty Moore became the first female Red Arrows pilot. Flt Lt Moore joined the RAF in 1998, becoming a Hawk instructor and then Tornado pilot. She is not the first woman to apply for the Red Arrows, but she was the first to be shortlisted and then selected.

Red Arrows Relocation
RAF Scampton will be closed by 2022 and the Red Arrows relocated to another RAF base.

In May 2020 it was announced that the Red Arrows would be based at RAF Waddington and relocation will take place before RAF Scampton closes in late 2022. The airspace over RAF Scampton will be retained for the team's training and display practice.

Hawk T1 Retirement
The Royal Air Force retired the Hawk T1 from 100 (aggressor) Squadron along with the Royal Navy's Hawk T1 (736 Naval Air Squadron) at the end of March 2022. However, the Ministry of Defence said they are 'committed to supporting the Red Arrows' and they are expected to operate their Hawk T1s until at least 2030.