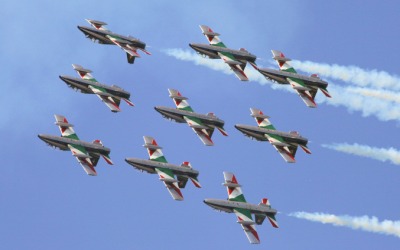 The Frecce Tricolori (Three-coloured Arrows) team of Italy fly ten MB-339PAN aircraft. They are based at Rivolto, Italy and are the only display team to fly as many as ten aircraft although nine remain in formation while one other flies solo during most of the show.

The Italians have earned a reputation as one of the most flamboyant and enjoyable display teams to watch in Europe .

History
The Frecce Tricolori display team were formed on the 1st March, 1961 at Rivolto, Italy. The team initially used the North American F86E Sabre which it retained for two years before converting to the Fiat G-91PAN. Eighteen years later the team received the Aermacchi MB-339PAN which it still flys today.

On August 28, 1988 at Ramstein AB, West Germany, during an airshow, there was a terrible accident involving the Frecce Tricolori. During a cross-over manouvre there was a collision which resulted in several aircraft crashing onto the runway and into the crowd killing 70 people. This accident brought home the dangers of close formation flying and aerobatics, and so new guidelines were introduced for all the display teams to follow.

The Italian team is unique in flying ten aircraft in its display. It doesn't have a synchro pair but favours a solo aircraft to show off the aircraft. The solo aircraft can be seen making a 'crazy flight' pass. The team also features a spectacular ten man opposition cross-over.