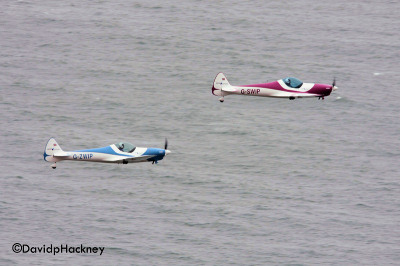 The Twister Aerobatics Team consists of up to three Silence Twister aircraft which are based in Thame, Oxfordshire.

They display at many airshows in the UK and overseas as a single, two-ship or occasionally a 3-ship display and can also take part in spectacular dusk displays using wingtip pyrotechnics. 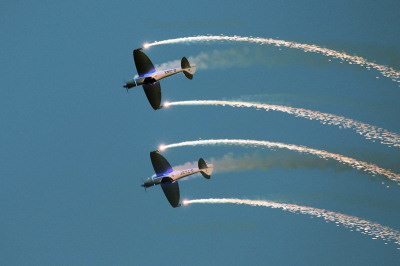 Photo by David Hackney
History
The Silence Twister is a German ultralight designed for amateur constuction. It has a single seat and is a low-wing monoplane with elliptical wings and tailplane which drew its inspiration from the Supermarine Spitfire.

Team leader, Peter Wells first saw this aircraft at the 2004 Friedrichshafen Aerofair in Germany and set about developing the original ultralight specification into an aerobatic aeroplane with full aerobatic engine and smoke system.

Peter made his first public display in the original 80hp Jabiru-powered Silence SA180 Twister G-TWST at the Abingdon Air & Country Show in 2008. Later that year he joined forces with the Swift Aerobatic Display Team displaying at the Yeovilton and Farnborough air shows. In 2009, the team displayed at the Al Ain Aerobatics Show in the United Arab Emirates.

In 2009, he displayed with his second Twister, G-RIOT which had a more powerful engine and rebuilt G-TWST to the same specification.

The Twister Duo was formed in 2010 using both Twisters with the other aircraft flown by Guy Westgate. They displayed at venues across Europe and the UK. In 2010, a single Twister saw its debut at the Bournemouth Air Festival's 'Night Air Dusk Display' and was fitted with wingtip pyrotechnics. Two weeks later both Twisters made their full Twister Pyro Display debut at the 1st Sanicole Sunset Airshow in Belgium.

In 2011, the team was known as the 'SWIP Team' as they were sponsored by 'Scottish Widows Investment Partnership' (SWIP) and painted in their corporate colours and registered G-SWIP & G-ZWIP.

A third Twister (G-JINX) joined the fleet in 2013 and a 3-ship display took place at the Sunderland Airshow. Will Hilton displayed a Twister at the Abingdon show in 2013.