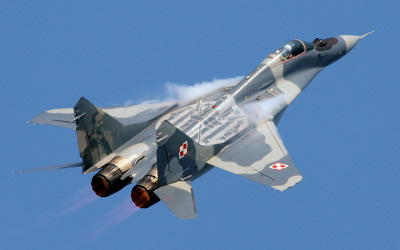 Many handheld Air-band radios/scanners are available today costing from just a few pounds to several hundred pounds. The cheaper air-band radio is usually able to pick up transmissions from civilian aircraft but are limited by the absence of accurate tuning so you have little idea of what frequency you are listening to and you are often tuned into more than one frequency at the same time. Click here to view Airband Scanners and accessories at Amazon.

A scanner, while more costly (about £70 and more), usually consists of a keypad to enter a particular frequency, LCD display, a memory which will remember stored frequencies, and the ability to scan through a certain set of frequencies. There isn't any frequency overlap that you get on the cheaper Air-band radio. You can get either a hand-held scanner, ideal for air shows etc, or a larger desk top/base station model.

Both VHF and UHF are short range, line-of-sight radio transmissions which are restricted to a maximum range of about 200 miles due to the curvature of the earth and usually considerably less depending on the surroundings (hills etc). Some scanners can receive the HF (short wave) aircraft band in addition to the VHF and UHF aircraft bands. The HF band is not restricted to line-of-sight radio transmissions and can be used to monitor Shanwick and the trans-Atlantic routes etc. There are also multi-band scanners which cover much more than just the aircraft bands.

A handheld scanner usually includes a belt-clip and wrist-strap for convenience. It is powered by normal or rechargeable batteries and includes a speaker, earphone jack, and detachable antenna.

The scanner may have a keypad for manually entering frequencies or you may be able to connect it to a computer for programming in the frequencies. The frequencies that are entered into the scanner's memory are usually organised into 'Banks' and 'Channels'.

A scanner includes a 'Squelch' control which is used to eliminate background noise. There is also an AM and FM 'Mode' and for aircraft reception you should use AM only.

Some more expensive scanner models have many additional functions which makes them quite complicated to use especially as the included instructions are sometimes a bit vague. More information on your scanner can usually be found on the Internet following a Google search.

Using a scanner at Airshows:

The airshow frequency (Tower) can usually be received on the civilian VHF aircraft band and will most likely be a 'Common Air Display Frequency' which is temporarily used for the duration of the airshow. They may also use the usual Tower frequency for that particular airfield. If you see a stall at the airshow selling airband scanners and accessories then they may display a list of frequencies being used or will help you.

If you want to listen in to a military air display team such as the Red Arrows then you will need a scanner that receives the UHF aircraft band. You will here the Red Arrows leader barking his commands to the other Red Arrows pilots.

Actually listening to aircraft frequencies on VHF/UHF/HF air bands in the UK is illegal but actually owning and using a scanner for licensed broadcasts (Citizens Band, Amateur, licensed broadcast radio, weather and navigation broadcasts) is okay, but the authorities usually aren't concerned with people using them at air shows. If you go to a UK airshow you will see many people using air-band scanners but it is advisable to be discrete when using a scanner by using an earpiece and not having the scanner blasting out. Please do not bring a transceiver to an airshow as it could be very dangerous. When visiting air shows in other countries then it is advisable to check their laws to see if using a scanner is acceptable.

Which scanner should i buy?

It all depends on how much you are willing to pay for a scanner and what you want to use it for. If you are using it mainly at civilian airports then you may only need a scanner with the VHF aircraft band (108-137MHz). If you want a scanner to also be able to receive military aircraft transmissions then you need a scanner with the UHF aircraft band (225-400MHz). You may also want to hear aircraft on the HF band or have a multi-band scanner that can pick up many other transmissions such as local marine communications, CB radio, or police and emergency services etc.

There are many airband models on the market today all packed with various features making it hard to choose which is the best scanner for you. I will mention a few popular hand-held air-band scanners that are good value for money and ideal for listening to aviation broadcasts at air shows or airports etc.

which has a wide continuous frequency range from 100KHz to 1309.995MHz which includes the civilian & military airband but has no keypad. Without the keypad it means that manual programming is tedious so you will probably want programming software and a cable.

GRE have the PSR-295 (now discontinued)

which is very good for airband (civilian & military) listening and has a wide frequency range and includes a keypad.

Uniden have the very popular UBC-125XLT

scanner which receives both civilian and military airband frequencies, a keypad, and is a very good scanner for a reasonable price. The UBC-3500XLT

has a very wide frequency range including civilian & military airband along with a keypad. The UBC-3500XLT is generally thought to be one of the best airband scanners but has now been discontinued and replaced by the expensive but professional Uniden Bearcat UBCD3600XLT Digital & Analogue Radio Scanner

. Other notable Uniden Scanners which receive the civilian airband only include the Uniden UBC75XLT Handheld Scanner

Whistler have an affordable handheld scanner with the Whistler WS1010 Scanner

which has a keypad and can receive civilian airband frequencies.

If you are considering buying second-hand from Ebay

then a highly sought after but obsolete scanner for aviation is the Yupiteru MVT-7100 which is considered to be superior to the newer MVT-7200 & MVT 7300 models. The excellent Uniden Bearcat 3500XLT has now been discontinued but these scanners can be found second-hand on Ebay etc.

More reviews to be added later...

Where can i buy a Scanner?

Scanners can be bought at Amazon (see bottom of page), or you may find a shop that sells them in your local Airport.

Which frequencies do i use?

Also add the frequencies of any Display Teams that are expected to display at the airshow.