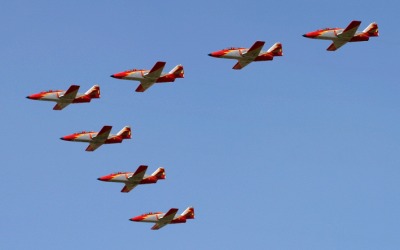 The Patrulla Aguila Spanish Air Force display team are a relatively new team having been formed on July 4th 1985. The Spanish team have only ever flown one type of aircraft, the CASA C-101EB Aviojet. The silver/red/yellow colour scheme was adopted in 1992 for the Barcelona Olympics which replaced the silver/orange colour scheme used by other aircraft in the training fleet. They currently fly with seven aircraft.

They are the only team to use yellow smoke, and are also known for their formation landings.

History
The Patrulla Aguila display team operates from San Javier Air Base, near La Manga, in the Murcia region of Spain, which is home to the Spanish Air Force Academy and the rest of the C-101 fleet. The team consists of seven CASA C-101EB Aviojets and support is by a CASA 212 Aviocar.

In 1985 the team was formed and flew just five Aviojets. They made their debut performance at Jerez de la Frontera on June 14th of that year. Their first International appearance was at Koksijde airshow, Belgium on July 18th 1986, when they flew with six Aviojets. In 1988 the team started flying seven Aviojet aircraft which they still do today.

The CASA C-101 Aviojet is a Spanish jet-powered trainer aircraft currently in use by the Air Forces of Spain, Chile, Honduras, and Jordan.