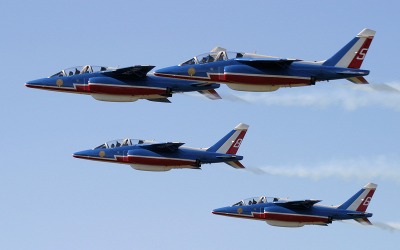 2019 UK Displays:
The Patrouille de France are scheduled to display at RIAT 2019.

The Alpha Jets are finished in a red, white, and blue colour scheme and they carry Armee de l'air inscriptions under the wing.

In 1964 the Patrouille de France display team found a permanent home at Salon-de-Provence which is where the French Air Force Academy is situated. Next they converted to the twin-tailed Fouga CM170 Magister which they continued to use for over 13 years. During this time the team grew successively from six to eleven before finally being limited to nine aircraft.Then by 1981 they converted to the Dassault-Breguet/Dornier Alpha Jet which they still fly today.

During a season all the personnel and equipment needed to support the airshows are carried either by a Transall C160 or a Lockheed C-130 Hercules of the French Transport Command (COTAM).

The Patrouille de France now consist of 8 Alpha jet aircraft. The display routine follows a similar pattern to those of other display teams and they also employ a synchro pair.