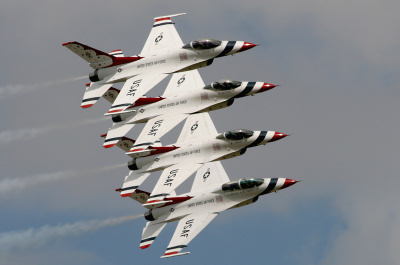 The USAF Thunderbirds display team are based at Nellis Air Force Base in Nevada. They fly six Lockheed Martin F-16C/D Fighting Falcon aircraft. Most International display teams fly trainer aircraft but the USAF use a front-line fighter aircraft.

It takes just a few minor modifications to convert a current combat F-16 to a Thunderbirds aircaft by replacing the 20mm cannon and ammunition drum with a smoke-generating system, including its plumbing and control switches, the removal of the jet fuel starter exhaust door, and the application of the Thunderbirds' glossy red, white, and blue polyurethane paint scheme.

In 1969 they flew the formidable F-4E Phantom II but due to a fuel crises they adopted the Northdrop T-38A Talon trainer in 1974. In 1982 there was a tragic training accident involving four T-38 Talon aircraft which cost four lives. This accident threatened the teams existence but they overcame this and re-equipped in October 1982 with the General Dynamics F-16A/B Fighting Falcon. The F-16C/D Fighting Falcon (Lockheed purchased the General Dynamics division which makes the F-16 in 1993.) was used in 1992 which is still used today.

The USAF Thunderbirds display team begin their display on the ground which involves a carefully choreographed walk-down, strap-in, engine start, checks etc. They fly in a very tight formation with precise manoevres.