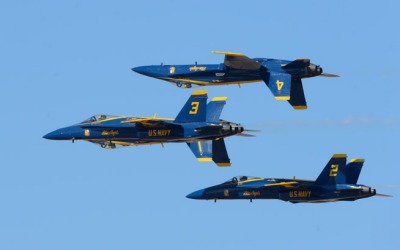 During the display, Blue Angels (1-4) perform aerobatic maneuvers while in a tight four-plane Diamond Formation while Blue Angel 5 and Blue Angel 6 perform as opposing solos with cross-overs and mirror formations. At the end of the display all six of the aircraft join in the Delta Formation performing a series of flat passes, turns, loops, and rolls and concluding in the team's signature 'fleur-de-lis' closing maneuver.

The only difference between a standard F/A-18 and a Blue Angel's F/A-18 is that the cannon is replaced by a smoke-oil tank and a spring fitted on the stick which applies pressure for better formation and inverted flying. The Blue Angel's smoke is produced by pumping biodegradable paraffin-based oil directly into the exhaust nozzles where the oil is instantly vapourized into smoke. The smoke enhances the display for the spectators by making them easier to follow and provides a means for the solo pilots to keep sight of each other durring cross-overs and conditions of lowered visibility or haze.

The fastest speed that the Blue Angels fly during a display is about 700 mph (just under Mach 1; Sneak Pass) and the slowest speed is about 120 mph (indicated speed; Section High Alpha), both flown by the solo pilots during the show.