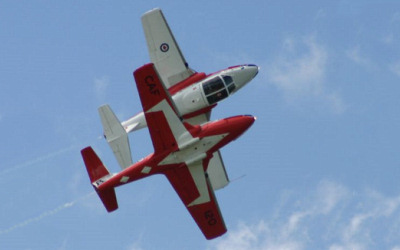 The Snowbirds Demonstration Team of Canada display using nine distinctive red and white painted Canadair CT-114 Tutors for aerobatic performances. There are also 2 spare aircraft flown by the team coordinators. The Snowbirds are part of 431 squadron and they are the only major military aerobatics team that operates without a support aircraft.

The Snowbirds are based at CFB Moose Jaw, in Saskatchewan, which is also Canada's primary military flight training centre.

History
The Snowbirds Demonstration Team (431 Squadron) is a Canadian icon comprised of serving members of the Canadian Forces. Their pilots and technicians work as a team to bring thrilling performances to the North American public. Serving as Canadian ambassadors, the Snowbirds demonstrate the high level of professionalism, teamwork, excellence, discipline and dedication inherent in the women and men of the Air Force and the Canadian Forces.

The Snowbirds, who first performed in July of 1971, operated on a year to year basis for seven years, before being finally established as a permanent squadron on 1 April, 1978. The Canadian Forces Air Demonstration Team was then renamed 431 (Air Demonstration) Squadron.

The seed for the Snowbirds was firmly planted in 1967 with the formation of the Golden Centennaires to commemorate Canada's centennial year. Ten RCAF basic jet training aircraft, CT-114 Tutors, received the gold and blue paint scheme which distinguished them as the aircraft from the RCAF formation aerobatic team. However, at the end of the 1967 season, the Centennaires were disbanded, and the aircraft were returned to the training role. The Snowbirds were later formed in 1971 at Moose Jaw, in Saskatchewan.

In 1976, the growing popularity of the team in the United States was reflected in the request for a performance at a show in Philadelphia on the 4th of July as part of the American Bi-centennial celebrations. In Canada, the team performed at both Montreal and Kingston as part of the ceremonies during the Summer Olympics.

Under the leadership of Major Dean Rainkie of Melville, Saskatchewan the 1993-94 Snowbirds marked some historic milestones. It was in 1993 that the team saw its first performances outside of Canada and the United States with three aerial demonstrations in Guadalajara, Mexico. In 1994 Major Rainkie led the team through 64 performances before an estimated 3.6 million spectators. The team also commemorated the 70th Anniversary of the Royal Canadian Air Force, proudly displaying a tribute to the RCAF on each aircraft.